Medical cannabis has great possibility in treatments of epilepsy. Cannabis is shown by several study to be effective in treating epileptic seizures, by completely suppressing them in some cases.Cannabis has been used medicinally for thousands of years by mankind for a wide range of disorders.

It is only recently in human history that the powerful herb has been a victim of human greed and has been linked by prohibition. However, these chains are broken in many parts of the world, while many scientific advances and tons of evidence show that cannabis is a powerful medicinal tool to be properly studied and distributed legally to those who require its healing powers. Cannabis is administered medically for a multitude of disorders.

Epilepsy is a neurological disease that directly affects the nervous system and causes epileptic seizures in individuals with the disease. Epilepsy is usually diagnosed once the patient has had a series of seizures. The triggers of these seizures are disruptions in the electrical activity of the brain. The reason behind the onset of these seizures remains largely unknown, but it may seem to come from genetic origins and brain trauma. 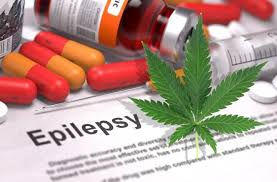 One of the goals of epilepsy treatment is to enable people to continue to lead functional and rewarding lives. Treatments include surgery and nutritional and lifestyle changes. However, the most common attempt to treat the disease is through medications, which many patients must take for the rest of their lives.

The majority of epileptic seizures are controlled by the use of anticonvulsant drugs that are used to reduce the severity of seizures and calm hyperactivity in the brain.

Even though these medications are sometimes effective, patients usually start with low doses and gradually increase the amounts, because of the extent of side effects. The list of available anticonvulsants is long. But the list of side effects experienced by patients is just as long.

Common side effects include vision loss, drowsiness and upset stomach. Idiosyncratic side effects are more rare, with rashes and a reduced number of blood cells. Some medications in particular have unique side effects, such as swelling of the weight gain, gums and hair loss.

For 70 percent of people with epilepsy who cannot control seizures, having to look for medications that can cause serious side effects are not an easy option. Fortunately, there seem to be alternative options on the horizon.

Cannabis is considered a potential treatment for epileptic seizures. Great successes were observed, which provoked a great movement of individuals and organizations in favor of access to Cannabis oil and its medicinal consumption.

The non-psychoactive cannabinoid CBDis at the center of attention thanks to its apparent positive effects on crises. And because of the enormous legal issues surrounding the psychoactive nature of the cannabis plant, CBD could be an easier entry point for medical marijuana for those living in countries where cannabis is prohibited.

Problems Facing Teaching and Learning of the English Language

HR Certifications: Do you Need Them?

5 Advantages of Chemical Dry Carpet Cleaning Bring to Your Home

Cleaning Your Carpets? Deodorize Them The Right Way

4 Domestic Cleaning Mistakes You Should Avoid

Multifactor Authentication Market will be growing at a CAGR of 16.10% during the forecast 2020...